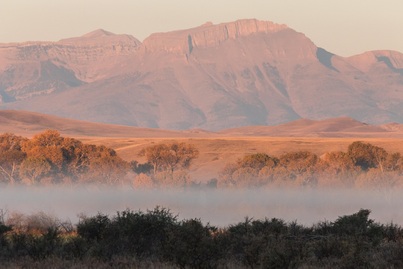 After several years of planning and saving, the fledgling congregation was able to complete construction of a church building in 1907. This building was located in Farmington, Montana and dedicated on August 4, 1907. The cost of construction was $4,243.62 and was fully paid in 2 years.

Over the years, the congregation struggled and saw many pastors serve them. During this period, a group of people also began worshipping in nearby Choteau. Both the Trinity congregation and the group in Choteau were served by Rev. Olaf Anderson, who ultimately suggested that the two small congregations join together. It was agreed that the two groups would in fact unite, and that the church building in Farmington would be physically moved to Choteau if the Choteau group would provide a plot of ground and dig the basement. Agreement was reached, and the Trinity church building was moved to Choteau in 1941.

From that time to the present, Trinity has had a dedicated pastor and has held regular worship services in the church building at its present location in Choteau. Since then, Trinity has had several renovations and two building additions, to bring the building to its current size and décor. Trinity purchased the current parsonage in 1971, and it is still used to house the pastor and his/her family.

Trinity also added a Christian preschool, which serves families in Choteau and the surrounding area.

Today, Trinity Lutheran Church is a part of the Evangelical Lutheran Church of America, but has never forgotten its Norwegian and German heritage. We owe a debt of thanks to our founding fathers who had the foresight and dedication to answer this call to build a grow a church in Choteau. Thanks be to God!